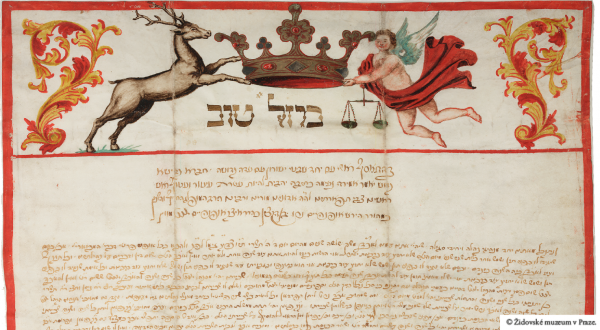 The seminar on Hebrew palaeography of early modern Ashkenaz focuses on early modern manuscripts produced in Bohemia and, more widely, in Ashkenazic script elsewhere. The seminar was founded in 2014 as a part of the Hebrew and Jewish Studies Programme with the underlying idea that the ability to read Hebrew manuscripts is one of the important skills for a student (scholar) of Jewish studies.

Although numerous older sources are available in printed editions, many texts can be accessed only in manuscript form. And since, in the eyes of the modern scholar, the letterpress tends to represent the medium of both the production and the reception of texts, it is paradoxically early modern manuscripts, especially that elude our attention simply because they use the allegedly “medieval” medium.

The aim of the seminar, which accepts interested students at any time, is to provide them with the skills to read early modern Hebrew scripts and to obtain basic codicological knowledge which makes the use of the manuscripts easier.

The project is generously supported by the Prague Centre for Jewish Studies and by internal grants from the Faculty of Arts of the Charles University.

Members of the seminar:

Tobiáš Smolík, graduate of the Hebrew and Jewish Studies Programme, CUFA, and a public programmes manager

The e-publication, which originated in the frame of the Seminar of Hebrew palaeography of Early Modern Ashkenaz between 2014 and 2019, traces the development of Ashkenazic Hebrew script between the 14th and the 19th centuries. Through its 59 samples those interested in Hebrew manuscripts can become acquainted with various types of Hebrew handwriting. The reading of the reproduced manuscript samples is made easier by the means of transcriptions, explanatory notes and commentaries (on the peculiarities of a particular script as well as on the content and the context of the samples). The edited texts are provided with Czech translations. Individual samples were selected not only in view of their representative palaeographic features, but also with respect to their content. We chose texts that reflect everyday reality such as occasional notes, scribes’ colophons, egodocuments (private letters, memorial texts such as family scrolls etc.) or documents of the internal government of Jewish communities. This provides the reader not only with a tool enabling him to read Hebrew manuscripts, but also with a collection of sources that offer an immediate glimpse into the life of (especially) Czech Jews in the premodern era.

The early modern printers knew already that it is impossible to edit or typeset a text without making mistakes and often shielded themselves with the above verse of Psalm 19:12. We will be grateful, therefore, if you can kindly let us know if you find a mistake or mistakes in the reader. Here you can find those which were already traced by readers or by ourselves when using the publication.

Tobiáš Smolík, Joachim Pollak (1798–1879): K roli rabína v třebíčské židovské obci 19. století [On the role of the rabbi in the Jewish Community in Třebíč in 19th century (Bc., defended)