Theological, Legal and Political Responses to Salafism – Call for Participation 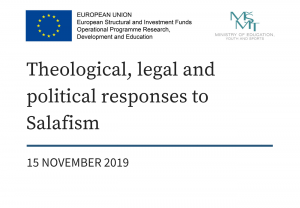 Call for participation in an international workshop on November 15th, 2019, Charles University, Prague

The Department of Middle Eastern Studies and the Institute of Political Science, Faculty of Arts, opens a call for participation at an international workshop on theological, legal and political responses to Salafi ideological proselytism.

Since Saudi Arabia concentrated religious authority from the 1960s on, Saudi Pan-Islam, labelled Salafism, was massively exported to the Islamic world. In recent years, the attraction of Salafi proselytism, fuelled by political conflicts in the Middle East, has reached a substantial degree in many parts of the Islamic world and in its periphery too.

Salafism can be considered as a specifically modern and ideological and form of religious and social identity that seeks to gain local or regional hegemony over Islamic matters. If not a threat to security in certain regions, activist Salafism came slowly to be recognised as a challenge to local religious authority and hierarchy, social norms, cultural values and popular Islam.

While radical Salafi theological conceptions and responses to specific violent radicalisation online and offline have been already studied, wider religious, cultural and political implications of Salafi proselytising for national Islamic communities have been so far neglected. We do intend to map, scrutinize and discuss theological debates between proponents and opponents of Salafism in the Sunni context as a prerequisite to a more thorough understanding of the religious contention within Islam.

But in addition to dealing with Salafi propaganda itself, the workshop intends to also consider wider religious, cultural and political strategies in facing the Salafi proselytising.

The aim of the workshop is hence multi-fold:

We have preliminarily identified at least three areas of religious contention and response: theology, legal authority and national Islamic tradition. Considering the forms of those responses, we intend to discuss, on the intellectual level, how Islamic groups and organisations develop theological responses to defend theological and legal pluralism, e.g. through establishing institutions, spreading publications dealing with theology and jurisprudence and engaging in public debate. On a more practical level, we intend to discuss how local Islamic authorities activate and modernise mufti offices to keep up with the popular demand on religious and other counselling, how they involve hitherto neglected groups – such as women and youth – in a religious organisation, etc. Finally, we intend to study how religious authorities and national institutions such as ministries of culture and education, validate and develop national traditions of Islam that emphasise Islamic diversity, and include marginal or unrecognised currents, especially Sufism, into national Islamic identity.

The workshop aims to cover topics in these and other relevant areas in Europe, including the Balkans, the Maghreb, the EU, Indonesia and the wider Islamic world.

The workshop which will be held at the Faculty of Arts at Charles University in Prague, is being jointly hosted by the Department of Middle Eastern Studies as a sequel to previous work on Salafi theology and iconoclasm, and by the Institute for Political Science in the framework in a study group Ideologies and identities of the KREAS project („Creativity and Adaptability as Conditions of the Success of Europe in an Interrelated World” No. CZ.02.1.01/0.0/0.0/16_019/0000734). It will possibly result in further projects aiming at an edited volume.

Please send your abstract of up to 250 words to: zora.hesova@ff.cuni.cz before 10 September 2019.