Richard Wittmann: For They Cannot Speak 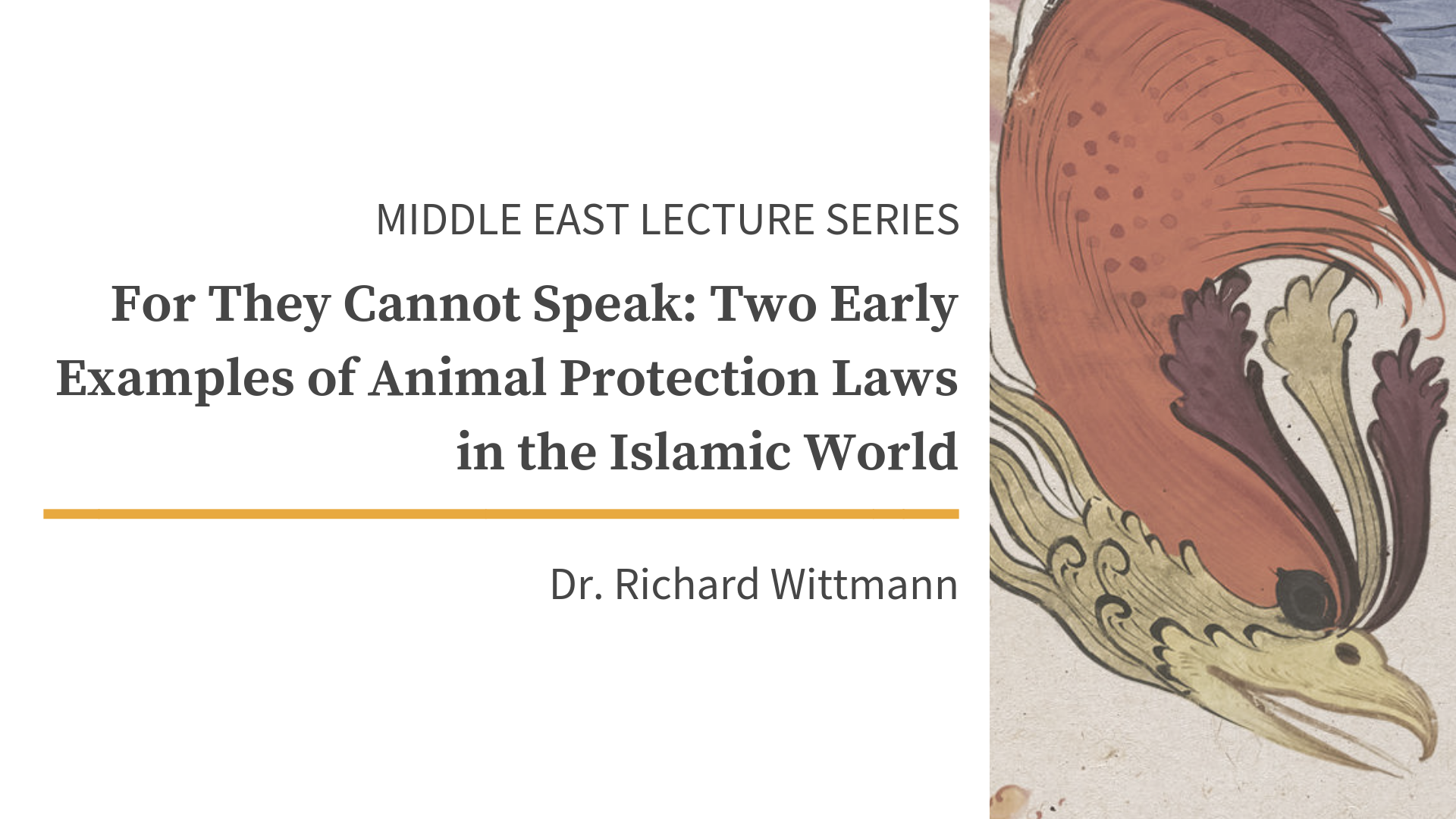 Abstract:
The legal protection of animals in the pre-modern Islamic world is a largely understudied topic among students of the Middle East. Idealized depictions of the interaction of humans with animals in the prescriptive religious texts of Orthodox Islam as well as in the writings of Islamic mystics do not allow for an adequate assessment of how animals were treated by people in different realms and periods of Islamic history.

This talk will offer a glimpse at the legal protection afforded to beasts of burden on the local level in two Ottoman cities on the basis of regional law codes (kanunnames). Two easily overlooked passages in Ottoman law codes from Anatolia at the beginning of the 16th century contain legal stipulations with regard to beasts of burden, which, as will be argued in this paper, present the earliest known codification of animal rights in the Ottoman context. More importantly, while regulating the protection of the rights of animals only for a very specific context, a close look at the legal stipulations reveals a surprisingly modern and “progressive“ sounding justification of the need of animals to receive protection from the abuse by humans. Is it possible that views held by animal rights activists of the 20th century and by a handful of Western philosophers since the 17th century in favor of a pathocentric approach to animal rights were already anticipated in an Ottoman legal code of the 16th century?

By contrasting the stipulations of the kanunnames to the views on animal rights expressed in Islamic doctrine, Sufi treatises, hisba texts and travelogues from the Ottoman period, this paper will call into question for Ottoman Anatolia of the early 16th century the predominant view on animal protection held for the pre-modern Islamic world (and beyond) from a merely anthropocentric perspective.

Richard Wittmann (Ph.D. in History and Middle Eastern Studies, Harvard University 2008) is the Associate Director of the Orient-Institut Istanbul, a German humanities research institute abroad. The Istanbul based member institute of the Max Weber Foundation is dedicated to the promotion of academic research on Turkey and its neighboring countries of the Balkans and the Near East. After studying Law, Islamic Studies, and Turcology at the University of Munich and at Freie Universität Berlin he was awarded a scholarship from Harvard University where he continued his studies at the Department of History and at the Center for Middle Eastern Studies.
His research interests focus on Islamic legal history and the social history of the Ottoman Empire. Special attention is given in his work to the consideration of self-narratives as historic sources for the study of the Near East. Richard Wittmann coordinates an international collaborative research project aiming at the study and publication of Ottoman self-narratives (www.istanbulmemories.org). He is the editor of the publication series Memoria. Fontes Minores ad Historiam Imperii Ottomanici Pertinentes (www.perspectivia.net/publikationen/memoria) and coeditor of the monograph series Life Narratives of the Ottoman Realm: Individual and Empire in the Near East (https://www.routledge.com/Life-Narratives-of-the-Ottoman-Realm-Individual-and-Empire-in-the-Near-East/book-series/LNOR).
His latest coedited volume Istanbul – Kushta – Constantinople. Narratives of Identity in the Ottoman Capital, 1830-1930 (Routledge) was released in September 2018.